Another year older, not much wiser

It’s Thanksgiving here today. While it’s usually one of my favorite times of year, this year it’s fallen at an odd time for me, which means I’m not home with my family and celebrating my birthday. I’m at my house, alone with my cat. It’s not too bad, though. I saw my family less than 2 weeks ago, and I will see them again in a few days when I become aunt-ed for a 4th time.

The weather has finally turned colder, which means lots of blankets and sweaters and boots. The best ways to stay comfortable. It also means my cat is actually attached to me. Right now he’s glued to my feet, desperate to stay warm. For anyone feeling sorry for my cat, just don’t. He’s so spoiled he has his own pumpkin house and a special blanket I wrap him in when we go to bed.

So…I thought I posted my Halloween update, but I apparently didn’t. Halloween was strange this year. My plans changed so many times that by the time Halloween actually arrived I just didn’t want to celebrate. That’s not a good sign because Halloween is one of my favorite holidays. I took some cute pictures and got a burrito, even though I hadn’t even bothered to get a new costume. Luckily I have a closet full of costumes already.

My handsome cat got a new costume, because I finally found one that perfectly matches him. 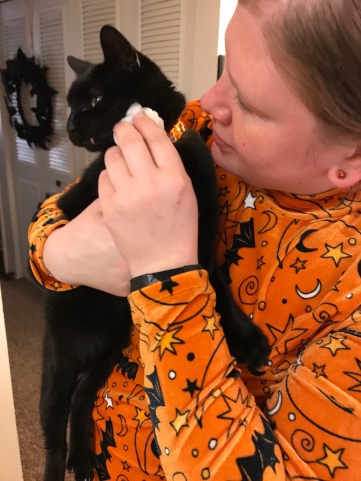 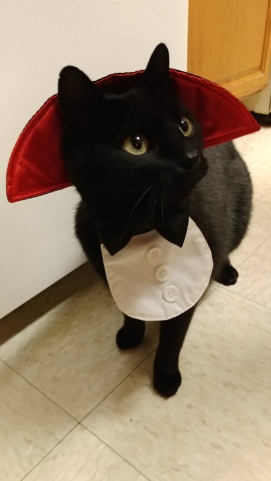 It’s safe to say I’ve been overwhelmingly stressed out recently. With the holidays rapidly approaching, I don’t see it getting any better, but I’m going to keep trying.

My Tuesday writing nights have sort of taken a hit the past few weeks. This is particularly bad considering it’s NaNoWriMo and I’m running a bit behind. I’m hoping to use this last week to catch up, but my current schedule for both jobs is working against me. I’m trying to stay determined, though. I can totally do this, right?

The good news is that I’ve gotten through one of the toughest scenes I needed to write. It’s one that I’ve known I needed to do, but had been ignoring for a while. But now that it’s finished I can move on and work towards the much more exciting part to write, the end of the book. Then go back and add in a few scenes that have been left out for the same reason.

The past few months I’ve been reading more from my e-reader by downloading books from the library. It’s pretty much the coolest thing. Libraries are amazing. I read Heart-Shaped Box by Joe Hill, who is quickly becoming a new favorite for me. I also read Fallen by Lauren Kate because sometimes I’m a sucker for a supernatural romance.

I also read Peter Pan for the first time, and holy crap it’s different than I expected. There are parts that are much darker that Disney implicated. Peter, himself, is much more interesting. There were several times that I stopped reading, went to my friend that recommended it and said “Scalps? They had scalps? From people??” and she would just nod and tell me to keep going. Peter Pan’s life was terrifying.

Since I forgot to post anything from last month, I can now proudly announce that I completed a 5k without dying. It was so much fun. I got 2 medals, took some fun pictures with the amazing MLT, and then played on the farm where the run was being held. And finally got to watch a pumpkin canon.

It was awesome. MLT and I spent a while trying to record ourselves doing some of the activities on the farm, but neither of us are skilled enough with our cameras yet. I have several pictures of me going down this huge slide, but no actual videos.

So the biggest thing I had been planning (besides the pumpkin run) was my magical themed birthday party. I’m aware that I’m an adult, but if I want to have a tropical/magical/mermaid/unicorn party, you bet I’m going to be buying decorations all summer for it.

Really, though, I did. It was a fun distraction, but now that it’s over I’m forced to remember how much I’ve been putting off work. Time for my to clean up the balloons and get back to writing.

So, the currents plans are try to hit my word count this month, and try not to die from excessive Christmas music. Hopefully one of those is achievable.

I hope everyone is having a good Thanksgiving, or random Thursday in November. I’m probably going to finish eating the pizza I made for lunch, the pretend I can’t hear my neighbor’s music blaring from their cars.

I'm just going to keep writing until I run out of words
View all posts by Jess →
This entry was posted in Uncategorized, Updates and tagged birthday, family, friends, holidays, life, NaNoWriMo, stress, thanksgiving, writing. Bookmark the permalink.